Welcome to NewDay – Where Care and Compassion Come First

Pet care the way it was meant to be, now available at our Jacksonville Airport Pet Paradise location. From routine checkups and vaccinations to diagnostics and procedures, our veterinarians provide the highest quality care in a stress-free environment. Book your appointment today.

Available to all day camp and overnight guests, all veterinary care is provided by a certified veterinarian. Also available by appointment for drop-ins.

Not all services are available at all clinics. Please see your local Pet Paradise veterinary clinic for more details.

STAYING CONNECTED WITH YOUR VET IS JUST A CLICK AWAY

Scratch the old days of traditional, tail-tucking veterinary care. We’re raising the bar for what it means to take your pet to the vet. Connected Care helps you keep up with your pet’s health and your busy schedule from the comfort of home.
Connected Care is not for first time patients. Our veterinarians must have physically seen your pet within the past year before using this service.

Our wellness plans cover all of the preventative veterinary care your fur baby may need throughout the year at one flat monthly rate. All plans require a one-time membership fee of $48.

The Core Plan offers the essentials to help maintain your pet's health. From exams to vaccines, this convenient plan has your pet covered for the basics of medical care.
$38/month

The Vital Plan adds an additional layer of prevention for your pet. This plan includes yearly bloodwork, urinalysis and lifestyle vaccinations.
$52/month

The Premium Plan offers the complete care package for your pet. This plan includes added services such as dental cleaning, blood pressure checks and an EKG.
$66/month 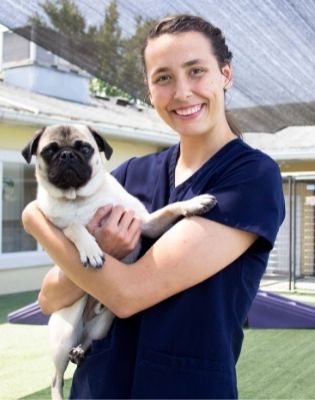 Veterinary care is by far the most rewarding career field! Sierra Joachim joined the Pet Paradise Veterinary Services team in April of 2022, shortly after moving to Northeast Florida. Sierra has a large family, consisting of three dogs [Tyson, Sable, and Xander], 5 lizards, 1 snake, and 1 turtle. Sierra's passion for working with animals started before she could even write her name. Much to her mother's dismay, she would often be caught attempting to sneak in animals, bugs, and reptiles found during the days adventuring. That starry-eyed childhood affection towards all species developed over the years into a devotion for compassionate healthcare. Sierra is a firm believer that client-staff trust is the foundation on which education and preventative care is built. Prior to joining Pet Paradise, Sierra worked her way up from Veterinary Assistant to Practice Manager over the course of five happiness-filled years. Have no doubt that from the time that you and your furry family member are greeted with a big smile, you can trust that Sierra will care for them as if they were her own!

A New Day in Veterinary Care

The vet techs are wonderful..

The vet techs are wonderful.. They are caring and helpful in providing information regarding your pets health care. The doctor provided me with the best care for my pup. This facility is professional, clean and the dogs are truly having a blast. What an amazing place for any pet to come and enjoy a day of Pet Paradise and it sure lives up to its name in every aspect. I have recommended this place to any pet owner I have come across.

The vet was great.

The vet was great. Fair pricing and caring workers when I am there in person. I did have to keep calling to get my dogs lab results back but I know they were transition new people in and since his result were fine it got lost in the mix.

I love Pet Paradise! They’ve always treated my dog with so much care and love just like I would. Sunday morning my pup woke up with hives, the next morning I was able to get him seen by the vet. It’s Saturday morning and I got a call checking up on him and seeing how he was doing. That shows that you guys care about your patients and that it’s not just about the money! Thank you!

The vet services are amazing!

The vet services are amazing! My basset always comes home happy even after his shots! The doctor takes care of the pups as if they were her own!

Definitely a great service all around!

The team was able to squeeze us in for an unscheduled vet appointment. The doctor recommended a treatment for allergies which solved our problem.  I wish I started bringing my dog here for more than play and boarding a long time ago.  Definitely a great service all around!

Absolutely the best customer service I’ve ever had.

Veterinarian is very responsive and has worked closely with me on my dog’s complex case. He quickly recognized issues and worked me into his case load. We really appreciate the good follow up and genuine care that they have for my sweet lab.

We appreciate her expertise.

My kitty has been having some issues and the veterinarian at Pet Paradise suggested some ideas no one else had considered. She explained everything thoroughly, We appreciate her expertise.

The technicians and vet thoroughly answered our questions

The technicians and vet thoroughly answered our questions and went above and beyond to help us with our dog's diet. They also helped to provide important medical arguments for our insurance claims. All staff members were thoroughly attentive and extremely helpful.

We love the direct communication

We love the direct communication from the vet and staff. They actually call and speak with us!